As [Mikami and Smith, p. 279] wrote, "... the mathematics of Japan was like her art, exquisite rather than grand." In some instances Japanese mathematicians came up with problems years before identical problems have been solved in the West, see, e.g., Neuberg Sangaku or Malfatti's Problem.

However, "[they] never developed a great theory that in any way compares with the calculus as it existed when Cauchy, for example, had finished with it."

But exquisite it was and the illustrations that survive appeal to the timeless sense of beautiful. A wealth of material has been gathered in a superbly illustrated book Sacred Mathematics: Japanese Temple Geometry by H. Fukagawa and Tony Rothman. Although the primary subject of the book is Temple Geometry, the authors go an extra mile painting a vivid picture of the Japanese mathematical landscape in the Edo period. Much of contemporary mathematics has been presented in a peculiar format of wooden tablets - sangaku - hung in temples and shrines all over the country. But mathematics has been also spread by a more conventional means, via books and manuscripts and by itinerant teachers. In the first three chapters of their book, Fukagawa and Rothman give an eclectic account of the history of Japanese mathematics and of works by native mathematicians.

Here are just two examples from the book.

One illustration is plucked from the Chinese Suanfa Tong Zong, or Systematic Treatise on Mathematics by Cheng Da-wei, Chapter Excess and Lack (1592); the book that has a profound influence on traditional Japanese mathematicians.

Two reeds of equal height project 3 syaku above the surface of a pond. If we draw the top of one reed 9 syaku in the direction of the shore so that the top is just touching the surface of the water, find the depth of the pond.

Another examples deals with a practical problem of weighing an elephant. In the 1778 Funki Jinko-Ki, or Riches of Jinko-ki, an anonymous author suggests an approach that would without doubt be appreciated by the great Archimedes as much as by the modern health conscious public. Bring the elephant onto a boat and mark the water line. Remove the elephant, then fill the boat with stones of known weight until the water reaches the same level it did with the elephant. Quite an aerobic exercise is this! 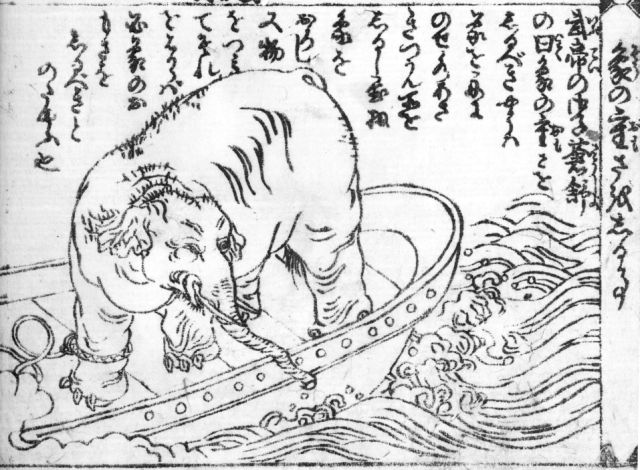