There are really impossible things... 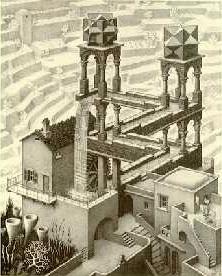 The fact that there are impossible things is hardly surprising. It's obvious (?) one can't draw a straight line with a compass. We already saw some less trivial examples. For example, I can't create a slider device that would allow switching between all slider puzzles available at this site. Such a device would constitute a mega-puzzle to which a switch will have to be provided, which in turn would create another mega-mega-puzzle and so on ad infinitum. Selfreferences allow for questions that could not be logically answered.

However, if you think that the only impossible things are trivial and those that depend on some kind of math trickery, think twice. There are really impossible things. There are a few known yet from antiquity that were attempted by dozens (and probably more) for thousands years until their impossibility has been revealed in recent times.

Let me remark that with so many (simple) things impossible some possible things appear nothing less than surprising. There are even those that appear at first sight impossible, but can be easily made even from paper with very little effort.

There is a fine logical puzzle about two identical twins. Well, they were not quite identical, but appeared to give identical answers to identical questions. Is it possible to devise a sequence of questions that require yes/no answers so that, as a result, one would tell one brother from the other? Here too, that which seems impossible proves to be possible after all.