Some Properties of Napoleon's Configuration

and also when they are constructed "inwardly":

The centroid of Napoleon's triangle $A'B'C'$ coincides with that of the reference triangle ABC.

The simplest proof I am aware of makes use of complex numbers, see a separate discussion. The proof holds both for the outer and the inner Napoleon's triangles. It follows that the centroids of the two Napoleon triangles - the outer and the inner - coincide. This fact was mentioned in the classical [Geometry Revisited, p. 65], [Complex Numbers and Geometry, p. 113] or [MathematicalGems, p. 40]. The two books, however, failed to mention that the same point also serves as the centroid of the base triangle $ABC.$

The three lines form equal angles of $60^{\circ}$ or $120^{\circ},$ depending on how one looks at the configuration. This is equivalent to the claim that the circumcircles of triangles $ABC'',$ $AB''C,$ and $A''BC$ are concurrent.

This implies the next property.

The sides of the Napoleon triangle serve as perpendicular bisectors of the lines joining Fermat's point to the vertices of $\Delta ABC.$

This follows from the fact that, by the construction, the vertices of Napoleon's triangle are the centers of the circumcircles of triangles $ABC'',$ $AB''C,$ and $A''BC$ while the segments $AF,$ $BF,$ $CF$ ($F$ being the Fermat point) are the common chords of the circles taken two at a time.

The circumcricles of Napoleon's triangles are concurrent; in an acute triangle they meet at Fermat's point. As such, they admit a triangle with one vertex on each of the circles whose sides pass through the vertices of the base triangle.

This is actually a porism: the starting point for the construction of that triangle can be chosen arbitrarily. The triangle is always equilateral.

Here we deal with both inner and outer Napoleon's triangles. This necessitates notations that differentiate between the two.

For proof see a separate page. 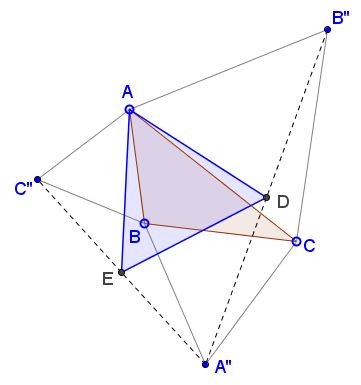 Prove that $\Delta ADE\;$ is equilateral.

For a proof see a separate page.