Back in 1996, Alexander Bogomolny started making the internet math-friendly by creating thousands of images, programs and pages for cut-the-knot.org, right up to his last update on July 6, 2018.

At around the same time, Eric Weisstein started what is now MathWorld and Ed Pegg (myself) started mathpuzzle.com. In those pre-Google days of the internet, good math content was hard to find. When uncovering something new, it was always a relief to find the material already added to one of the other math sites, and in that way Alex saved many a lot of time. Since then, both Eric and I have been hired by Wolfram Research, which, as a company, seeks to keep math working and well represented on the web.

Alex passed away on July 7, 2018. His friend Nassim Taleb announced the devastating news: He was of the few saints you meet in life: he gave more, much more than he took. Alex's family and friends asked the Wolfram Foundation to serve as a steward for continuing maintenance and updates to the site.

Due to the recent abandonment of plugins (and Java support) by all browsers, now-non-functional interactive examples on this site will be replaced where possible with cloud-based Wolfram Language versions from the Wolfram Demonstrations Project, which is a free community resource that does not require plugins. Alex's original Java code will be archived on GitHub.

While submissions will continue to be processed and implemented, no other substantive changes to the site are planned. Cut the Knot was Alex's life work, and deserves to remain as he envisioned it. 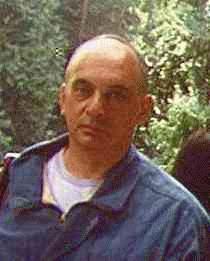 I am a former Associate Professor of Mathematics at the University of Iowa turned (due to the innate adventurous spirit) software developer. Since venturing into commercial world about 30 years ago I worked on many projects, acquired a variety of practical skills, and still haven't forgotten everything I learned and knew in my previous life. Cut The Knot Software is my business incarnation. We offer a combination of teaching and programming experience and a deep attachment to mathematics.

I maintain the site Interactive Mathematics Miscellany and Puzzles, although, with time, the number of contributions from various people grew considerably. The overall responsibility is mine as are the errors (please report if you find any), but I am happy to acknowledge my debt to William McWorter (late), Scott E. Brodie, Nathan Bowler, Stuart Anderson, Hubert Shutrick, Grégoire Nicollier, Leonard Giugiuc without whose original contributions the site would not probably be the same, naturally.

The site is a free-to-all undertaking supported by advertisement and sales through an amazon.com store.