The man whose buddy is an abacus
has a friend he can count on.
G. Patrick Vennebush
Math Jokes 4 Mathy Falks
Robert D. Reed Publishers, 2010

Abacus and Its Relatives

Abacus is probably the first of calculating devices. Encyclopædia Britannica traces the word abacus to the Phoenician abak (sand). American Heritage Dictionary points to the Greek word abax, which might have originated from the Hebrew avak (dust). The etymology of the word abacus takes a sharp turn when it comes to the plural form. Abacuses is an expected and the most natural English plural. However, this is just as common to use abaci as if the word abacus was of a Latin origin (like locus/loci, focus/foci, etc.) For example, in Mathematics Dictionary edit by Glenn and Robert C. James (D. Van Nostrand, 1949, 1959, 1960, 1963, 1964, 1966), the plural is abaci with no equivocation.

There is little doubt that the Ancients used a flat surface with sand strewn evenly over it as a disposable tool for writing and counting. It's said that the great Archimedes was slain by a Roman soldier while concentrating on figures drawn in sand.

Later day abaci had grooves for small pebbles and later yet wires or rods on which counters could freely move back and forth. Each wire corresponded to a digit in a positional number system, commonly in base 10. A very curious state of affairs was mentioned by M. Gardner with a reference to K.Menninger. For more than 15 centuries the Greek and Romans and then Europeans in the Middle Ages and early Renaissance calculated on devices with authentic place-value system in which zero was represented by an empty line, wire or groove. Yet the written notations did not have a symbol for zero until it was borrowed by Arabs from Hindus and eventually introduced into Europe in 1202 by Leonardo Fibonacci of Piza in his Liber Abaci (The Book of Abacus). According to D. Knuth, counting with abaci was so convenient and easy that, at the time when only few knew how to write, it might have seemed preposterous to scribble some symbols on expensive papyrus when an excellent calculating device was readily available.

Chinese suan pan is different from the European abacus in that the board is split into two parts. The lower part contains only five counters on each wire, the upper contains two. Digits from 0 through 4 are represented solely by counters in the lower part. The other five digits need an upper counter. E.g., 8 is represented by 3 lower counters and 1 upper counter.

I was reminded by Scott Brodie that Japanese soroban differs from its chinese relative in that it enforces carrying by containing only 4 counters "below the bar" and only 1 counter "above the bar" on each "wire". This eliminates dual representations of "fives" and "tens". The Japanese call the low portion "earth" and the upper portion "heaven". 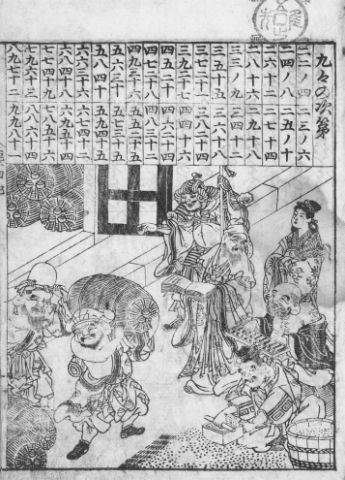 The print came from a 1715 edition of Jinko-ki (Large and Small Numbers) which was first introduced in Japan in 1627. The book that grew with every edition was originally a translation of the Chinese classic Sunfa Tong Zong (Systematic Treatise on Arithmetic) by Cheng Da-Wei (1593). The 1627 edition of Jinko-ki was an already expanded version of the Sunfa Tong Zong. It was published by Yoshida Mitsuyoshi (1598-1672) who modified many problems and added numerous illustrations to the translation.

The applet below represents an abacus close to the Russian variant where, for the ease of use, middle counters differ in color from all the rest. Given the advantage of home computers, the applet allows you to select a number system with bases from 2 through 16. Carrying of 1 to the next digit on the left is automatic. The entire interface with the applet is by clicking the mouse button. You can move a group of counters with a single click. Just point at the last counter you wish to move.

You can also display two abaci at the same time. If the Sync button is checked, then your actions on one of the abaci, is reflected in reverse on the other. This is how it is used. Place some numbers on the two abaci, and then check the Sync button. Start removing counters from one of the abaci. The same quantity will be added to the other abacus.