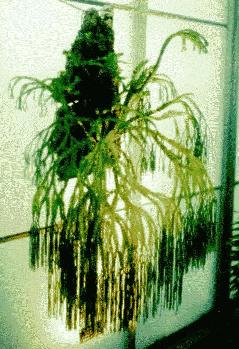 (There is order in chaos)

An iterative process with a simple quadratic equation when considered in the complex domain, led to computer graphics of unusual richness, beauty and appeal, and constituted one of the fundamental pieces in the foundation of the new science of fractals. A study of iterations with another quadratic equation was a cornerstone in a related development of the science of chaos. This is a well known logisitic equation. The process often closely describes a population change from year n to the next year (n+1). The first term (kx) reflects the reproduction tendency which is proportional to the present population. The need to coexist and share resources is presented by the inhibiting term (1-x). Robert May, an Australian mathematician engrossed in Biology, studied the global behavior of the process in its dependency on the selection of the coefficient k.

In the real domain, iterative processes admit quite a transparent graphical representation. Start with x0. Draw a vertical line until it intersects the graph of At the point of intersection Take this y as a new iterate: Since we are accustomed to have x values on the horizontal axis, recall that the equation of the diagonal in the first quadrant is Trace a horizontal line until its intersection with the diagonal and then downwards towards x-axis. Now starting with x1 you obtain x2 in a similar way. A vertical line up to the graph, then a horizontal line towards the diagonal. There is no need to continue the lines until they meet the axes. Just move intermittently between the graph and the diagonal.

On the diagram, subsequent iterates become closer and closer and each closer to the point of intersection of the graph and the diagonal. The point of intersection is a solution of the equation Such a solution is called stable because iterates {xn} tend to converge there. Not all solutions of are stable. If then obviously is a solution of This one is unstable. However close to 0 one selects the first approximation x0, x1 will be father away from 0 than x0, and the next iterate x2 will be even farther on and so on.

Below, the applet's panel is split into two parts - left and right. The horizontal axis on the right corresponds to a parameter a changing from .7 through 1. When you select a parameter by clicking on the right graph, on the left, the function is graphed, and iterations start with a random x0. I replaced k with 4a so that the top of the graph (attained for x=1/2) is always equal to a.

Now let's experiment with the iterations as a changes. For a while the equation will have a single stable point. Then, as a moves over the process begins alternating between two different points without converging to either. This is what is depicted on the right. A single curve of stable solutions of splits into two over the point corresponding to

After a = .86237... the two curves split further into four whereas the iteration oscillate between four different points. Next four points are replaced by 8 and 8 by 16 and so on. Note too that the horizontal distance between the split points (points of bifurcation) grows shorter and shorter. Until the bifurcation becomes so fast at the point that iterates race all over a segment instead of alternating between a few fixed points. The behavior is chaotic in the sense that it's absolutely impossible to predict where the next iterate will appear. Ian Stewart (p. 58) gives the following definition: Chaos is apparently random behavior with purely deterministic causes.

Interestingly, for some values of a even after the point .86237... there appears some regularity. You can easily find a window where iterates oscillate between three different points forming a 3-cycle. If you are patient you'll be able to detect a 6-cycle as well. Of course there are 12- and 24-cycles and others. The program is just not accurate enough to support deeper investigation.

The reason for the bifurcation may be surmised from the graph of the second iterate function Besides 0, the graph of the function crosses the diagonal at three points. The points A and C are stable so that depending on where they start the iterates of will converge to ither A or C. The point B, like 0, is a repeller. However close to B one starts the iterations they will escape from there and converge to either A or C.

The terminology is as follows.

Another thing is worth noting. With the parameter a near but less than .75, the slope of the graph at the stationary point is less than 1 in absolute value. As a approaches .75 the absolute value of the slop grows and, at .75, becomes 1. This makes the point unstable and eventually causes the iterations split into a 2-cycle. First the 2-cycle is attractive. Then, as a grows, it loses its stability and, eventually, splits into a 4-cycle.