In an equilateral triangle $ABC,$ two circles are tangent to the base $BC,$ the circumcircle $(ABC)$ and to each other. $AP$ is tangent to one, $AQ$ to the other. $M$ and $N$ are their respective points of tangency with the base.

As we shall see, the requirement that the two circles are tangent to each other is a red herring: the required identity holds even if they are not. The purpose of the applet above was to suggest an even stronger result.

There is a good deal of right triangles that, through a repeated use of the Pythagorean theorem, lead to the relation

which clearly solves the problem because a similar identity holds for the right triangle. (Note that in fact two configurations are possible: one shown above, the other for the case where $S$ is above $O.$ We stick with the one shown; the other submits to an only slightly different treatment.)

It follows that $AP=2a=2MH,$ as promised. For the second (right) circle, we similarly get $AQ=2HN,$ so that for the two of them

This solution too depends on a

Two circles are tangent internally at point $T.$ From points $D$ and $G$ on the big circle, tangents $DE$ and $GF$ are drawn to the small one. 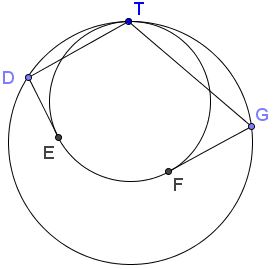 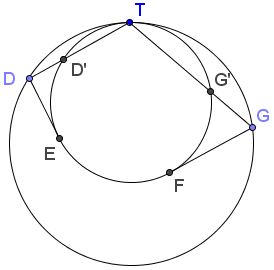 By the Power of a Point Theorem,

Introduce the notations as shown below.

This problem has been posted by Miguel Ochoa Sanchez (Peru) at the CutTheKnotMath facebook page. A solution by Leo Giugiuc (Romania) followed almost immediately. Leo also suggested that the two circles did not need to be tangent to each other. The solution above follows in Leo's footsteps.