This page grew from a previous one due to the comments and suggestions of Francisco Javier García Capitán (Córdoba, Spain) and Machó Bónis (Budapest, Hungary). The original problem has been posted by Miguel Ochoa Sanchez (Peru) and solved by Leo Giugiuc (Romania) who also suggested its first extension. 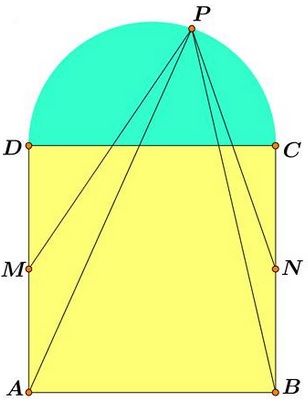 Leo Giugiuc observed that the identity holds on the whole circle.

Francisco Javier García Capitán suggested replacing $2$ on the right of the equation with an arbitrary real $k$ and observed that the resulting equation (in $P)$ is that of a circle with radius $\displaystyle r=\frac{-k^{2}+3k-1}{2|r-1|}$ which is a real circle for $\phi -1\lt\sqrt{r}\lt\phi,$ where $\phi$ is the Golden Ratio.

Machó Bónis observed that the resulting equation is third degree (because the fourth powers of both $x$ and $y$ cancel out in both the numerator and the denominator of the fraction on the left) and that the straight vertical line through the center of the square is a part of the solution which, when factored out, leaves a second degree equation - a conic. He also suggested that GeoGebra has a facility to handle implicitly defined curves which led the above applet.